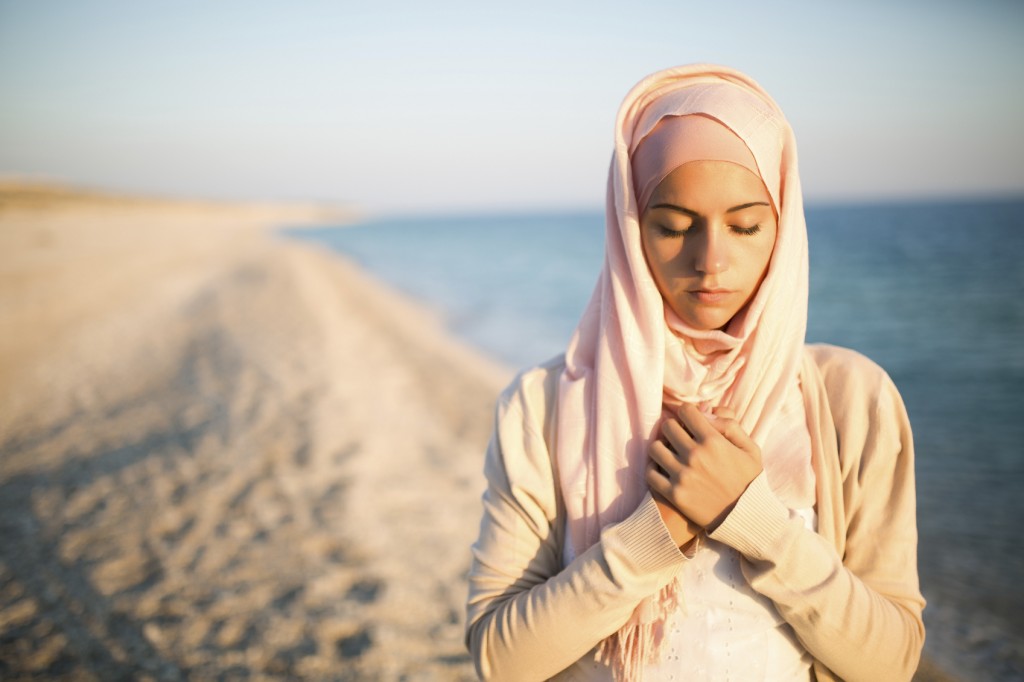 “I will be so happy if my Lord Jesus Christ accepts me as one of His followers. Is it possible if I [was] born a Muslim?”

That’s a question from a man in the Middle East who reached out to BGEA’s internet evangelism ministry, Search for Jesus, after hearing about Christ through Christian friends. He’s just one of many Muslim visitors who has been impacted by the online ministry where each month, thousands of people come from Muslim-dominated nations like Syria, Egypt, Algeria, Sudan and Yemen.

Search for Jesus has about 1,200 trained volunteers ready to respond to online visitors with the hope of the Gospel. Two of those volunteers, Brian and Kimberly of North Carolina, spent years as missionaries to Muslims in Southeast Asia and now answer emails from Muslims around the world.

Here, they discuss what keeps people from sharing the Gospel with Muslims and offer insight on how to do so effectively.

In early 2001, Brian felt called to missions, and God opened an opportunity in a Muslim country.

“I was not excited about it,” he said. “When I saw a Muslim man, I did not want to give him a hug. I had negative emotional feelings. I didn’t want to help save people; I wanted us to be saved from them as a nation.”

Then, as he read the book of Jonah, things changed.

When Jonah was called to preach to Ninevah, an enemy of Israel, he didn’t want to go. He’d rather his enemies be destroyed. And yet, God had compassion on the Ninevites and made sure they heard His message of forgiveness and life.

Brian thought of the Muslims he felt led to reach.

“While we were yet sinners, Christ died for us,” he said, quoting Romans 5:8. “If I received His mercy, they certainly deserve, or at least should have the opportunity, to have His mercy as well.”

The Fear & the Hope

Brian isn’t the only one who wasn’t thrilled at first about reaching out to Muslims.

“When people think of Muslims, … a lot of times the very first thing that comes to mind is fear,” Kimberly said. There are two kinds of fear, she added: “what they might do to me … and the fear of offending.” Both tend to keep Muslims at arm’s length, she said.

“They are desperate for approval from God.”
—Kimberly

At the same time, if you were to read the Quran chronologically, she said, you’d find a shift in Muhammad’s teachings on non-Muslims; in later years, he taught that they should be given a chance to convert, and if they didn’t, wage war. Dying as a martyr is the only way in Islam to be sure your sins are forgiven and that you’ll go to heaven.

Here’s where Kimberly gets teary eyed.

When you hear about suicide bombers blowing themselves up, she said, “it’s not always because they hate all these other people; many times it’s because they are desperate for approval from God.”

“I’m from Afghanistan and I am Muslim. During the last two years I dream that Jesus invites me to His way and tells me to ‘Take my hand day by day.’ I am interested in Jesus.” (Comment edited for clarity)

“I am a person from an area of radical Muslims and I am not satisfied [with] my faith because here are enemies and they are killing people daily. So I am searching [for] a true and loving God.”

That’s only a glimpse. Some sources estimate that thousands of Muslims are accepting Christ every year.

“Muslims need Jesus,” Kimberly said. “Muslims are not our enemy. Muslims are our mission field.”

Muslims in other countries typically see America as a Christian nation, Brian said, so when they look at the West, “they see a lot of immorality, and [in their eyes] that’s synonymous with Christianity.”

Thinking back to her time as a missionary in Bangladesh, Kimberly said, “They’ve got Baywatch in a country where you’re not allowed to show your ankles. … That’s what [they think] Christians are.”

“They see a lot of immorality, and [in their eyes] that’s synonymous with Christianity.”
—Brian

In fact, Brian and Kimberly often avoid calling themselves “Christians” altogether and instead use “followers of Christ.” There’s not a box for that, Brian said, and it may pique Muslims’ interest as they get to know you.

It’s also helpful, Brian continued, to show that you’re “taking a genuine interest in their lives.” Get to know them as people, not just Muslims—ask about their hobbies or what kind of food they like. You might even ask if they miss their home (if they’re from another country), Kimberly said, or ask what it’s like being a Muslim in America.

“Be more nosy than you would normally be,” she said, explaining that the Muslim culture is more up front than American culture.

Getting to the Gospel

So how can you transition from getting to know someone to talking about God?

Kimberly suggests asking simple questions like “What do you think God is like?” or “What’s a Christian to you?” Don’t be too confrontational, Brian said; just see where they’re at.

“It seems like it’s a lot easier to talk about religious things if you’re talking about someone else’s beliefs … before bringing up your own,” he said. And just as Christianity consists of various denominations, all Muslims don’t believe the same, either. They have different levels of knowledge and involvement in their faith, he said.

“Every person you speak to is an individual, so no one fits into an exact mold,” Brian said. That goes both ways: We may assume things about Muslims that aren’t true, and vice versa.

After touching on the topic of God, Brian said, you might make the point that although most people try to live their best and please God, no one is perfect. And that imperfection, that sin, is in direct opposition to God’s will for us. So how can we pay off that “sin debt”?

That’s where Jesus Christ comes in, Brian said. A Christian can show a Muslim friend how Jesus was the only one to pay for our sins and how our debts can be forgiven through Him.

Kimberly also suggests “going from the known to the unknown.” Start with something Christianity and Islam agree on, and deal with one issue at a time.

“Ask yourself: What is the next thing they need to know?” she said.

When Kimberly first started sharing her faith, she said, she was overwhelmed by having a person’s soul in the balance. But she reminds herself that the Holy Spirit is also at work, and it’s up to each person what he or she does with the Gospel.

“I am not responsible for making sure they respond a certain way,” Kimberly said. Many will hear it an average of seven times before they respond, she added.

>>Find more tips in this resource: Sharing Your Faith 101

The No. 1 issue Brian and Kimberly deal with in their ministry is whether Jesus is actually God. They also get lots of questions about supposed corruption of the Bible.

Muslims believe Jesus is separate from God, instead of God in human flesh as Christians believe. Many also think Christians worship multiple gods through their belief in the trinity.

Here are a few useful Bible verses to share:

The last verse in particular is interesting because one of Jesus’ names in the Quran is “Kalimatu’llah,” meaning “Word of God.”

“The Quran actually talks about Jesus a lot,” Kimberly said.

Here’s what else the Quran says about Jesus, from Surah 3, with verses in parentheses:

Keep in mind, though, Brian said, that while the above references are helpful, it can also be beneficial to paint a picture of Jesus—don’t just tell Muslims about Him; show them He is God by pointing to things He has done, such as heal the sick and offer forgiveness, things that set Him apart.

>>Find more answers in this article: Is Jesus God?

Is the Bible Corrupted?

“At the time of Muhammad, his followers were encouraged to read the Bible,” Brian said. “The Bible that Muhammad encouraged them to read is the same Bible we have today.” Yet many Muslims, he added, believe it’s been corrupted, partly through various translations.

A great question to ask, Brian said, is which parts have supposedly been corrupted and how they know.

Here are some teachings from the Quran that may be helpful to bring up as you discuss the topic:

>>Remember 5 reasons why we can trust the Bible.

Particularly in other countries, Muslims risk a lot when they convert to Christianity, Brian said, sometimes if they even express curiosity in Christianity. They may face rejection from their culture, be kicked out of their communities, separated or estranged from their families, beaten or killed.

“You don’t see many fake followers of Jesus in this kind of culture,” he said.

Here are two comments from people who connected with BGEA’s online ministry, Search for Jesus:

“My family is Muslim and most of the people in my country are Muslim. If they can know that I am converting, they will kill me. So then what will I do?”

“I am an Islam cleric who [has] been condemning Jesus. Now [I] want to follow Him but afraid of my past and my present. What do I do?”

“I don’t want to tell someone, ‘Follow Jesus. You may be [persecuted], but it’s worth it,’” Brian said. “Well it’s true, but I don’t feel qualified to say it because that’s easy for me to say, then close my computer and go get a sandwich.”

Above all, Brian and Kimberly stress the importance of prayer with so many hurdles facing Muslims who are interested in Christianity.

“Don’t underestimate the power of prayer,” Kimberly said. “They need our prayers.”

Note: The last three resources are not affiliated with the Billy Graham Evangelistic Association and may hold positions which differ from those of the organization.

Full/More Story at Source
How Can You Share the Gospel with Muslims?

How To Make The Ultimate Charcuterie Board • Tasty

How To Make The Cutest Baos • Tasty